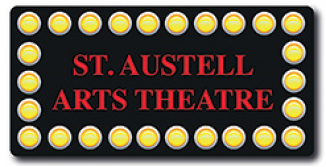 The St Austell Community Centre and Arts Theatre is situated on the A390, the main St Austell to Truro Road.

The 144 seater St Austell Arts Theatre puts on a year-round programme of professional and community events.  Other rooms within the building are used for a wide range of events, including: U3A meetings, dance classes, bridge, yoga, rehearsals and meetings.  All rooms, including the theatre, are available for hire.

The building is owned by Cornwall Council, but managed by a Board of Trustees, as a registered charity and a company limited by guarantee.  In the summer of 2014, the Trustees negotiated a 25 year lease for the Community Centre and Arts Theatre and, with that security, can begin to increase community use and professional events for the benefit of St Austell’s residents and visitors to the area

Check out events that are coming to the St Austell Arts Theatre and find out how you can become involved as a Volunteer or a Friend of the St Austell Community Centre.

Over the coming weeks, more and more will be added to our new website. http://www.staustellartstheatre.org.uk/community-centre/

As most of you present will remember the 2015 AGM of the Arts Centre was held last October.  So, unusually for an annual general meeting, this report covers a period of time just a little over 6 months.

At the AGM last October, some fresh faces were welcomed to the Board.  I am happy to report that these new Trustees have quickly established themselves as extremely useful additions to those Trustees, from the previous Board, that were chosen to continue in post.  The Board of Trustees have worked very closely with staff of the Cornwall Rural Community Charity and is indebted to the CRCC for its ongoing help, support and advice.

In the past 6 months, I believe great progress has been made, mostly in preparatory work for the future of the Arts Centre, to address certain anomalies that existed previously.  Firstly, the Trustees and Jonathan Aberdeen (Director, of the Arts Centre) arranged initially the closure, at Company House, of the dormant company created under the name of The St Austell Community Centre and Arts Theatre.  Once that had been done, the charity registered under the same name was closed and removed from the Charity Commission

Upon examination of our income and expenditure, it became apparent that some savings could be quickly made.  For example, previously there had been two monthly Direct Debits being unnecessarily paid to BT, covering the costs of 2 lines, one for line rental and one for Broadband.  It is possible to have both line rental and Broadband combined onto one line and this has been.  We have also identified a cheaper provider.  These two actions will save approximately half the previous annual costs, a saving of almost £500 per year.

We are also working with the Cornwall Energy Partnership and St Austell Renewables (STAR) on having a heating and energy review of the Centre.  Together with improved in-house management of energy, the Centre will be able to save up to £1,000 per year on electricity costs.  For example our first quarterly electricity bill in 2014 was £1,643; last year it was £2.094 and we have just received the first quarter’s electricity bill for 2016 and it is for £1,526, over £500 (or 25%) down on the same period last year.

The Trustees have formed a number of sub-groups to address certain specific areas including new initiatives, repairs, housekeeping and maintenance, fund raising, compliance / governance, publicity & marketing, Friends & Volunteers.  This is not an exhaustive list and other sub-groups may well be formed in time.

The CRCC has put together a funding bid for Training to include Front of House training; effective fundraising; attracting, retaining and management of volunteers; emergency first aid; customer service and I.T.   Also included in the training bid are on Committee skills, roles and responsibilities of Trustees and Trustee inductions.

In the past six months the Centre has also secured funding for the cost of new heaters for the theatre, from the Cornwall Council Community Chest fund and for replacement, and additional, IT hardware, software and for the provision of a stronger wifi reception through out the entire building, from the Manor Farm Solar Fund.  The combined amount of funding secured in the past 6 months comes to £2,010.

Our online presence has improved with now regular updating of the Arts Centre’s website and more time will be devoted to this in the future. The social media platforms of Facebook and Twitter continue to rise in popularity.  The Arts Centre’s Twitter account has 318 Followers and its official Facebook page has 1,040 people Likes.

The Arts Centre continues to enjoy good working relationships with both Officers and Members of St Austell Town Council and Cornwall Council.  The Arts Centre is also a Member of the St Austell Chamber of Commerce.

Future activities in the planning stages include another Open Day, likely to take place at the end of summer, or beginning of autumn; work on a major project Arts Council funded project, working in partnership with St Austell library; involvement in the Restormel Arts led “Festival of Fun”, planned for April 2017 and an immediate re-launch of the Arts Centre’s Friends scheme, which, due to other demands, has not been developed as fully as was planned.

Over the next few months, the Trustees of the Arts Centre will continue to work alongside the CRCC.  This work is constantly being reviewed and built upon.  The most recent major piece of work undertaken by the CRCC is the creation of a new business plan.  This will prove essential in attracting major funding and, hopefully, sponsorship, in the future.

All of the work undertaken since last October has been helped by the Centre’s Artistic Development Director, Jonathan Aberdeen.  Jonathan has taken on many additional duties, supporting the Trustees, which have been necessary and vital to maintaining the day-to-day operation of the Centre, but has meant Jonathan has had significantly less time to devote to his primary role.  Trustees will consider alternative options for covering this additional work, which will include increasing Trustees’ duties and involvement and growing the number of trained and suitable volunteers.

Trustees would also like to thank all those that continue to use and support the Arts Centre, often adding extra time and effort to help improve the look of the Centre both inside and out, particularly to those members of the U3A that, completely voluntarily, help to maintain and landscape the grounds and flowerbeds.

I’d like to finish on a practical note by making three announcements, all of which have been arranged and negotiated at no cost to the Centre.  Firstly, and it may seem a small point, but after years of having to make our own arrangements for refuse disposal.  Cornwall Council will now collect kerbside, black-bin bagged, domestic waste on a weekly basis.

Secondly, and thanks to Cornwall Council’s Estates Contracts Manager and Estates Services Valuer, the Arts Centre will be getting 2 new, 6 feet wide by 4 feet high signs for either side of the entrance into the Arts Centre.

Finally, and after decades of requests, Cornwall Council will be demolishing the derelict buildings at the edge of the car park.  For those who don’t know, it is often assumed that those buildings are part of our footprint of land with the lease the Arts Centre has with Cornwall Council.  They are not.  They sit on a separate parcel of land, still owned by Cornwall Council, but with nothing to do with its arrangement with the Centre.  So, finally, within the next few weeks those buildings will be gone!