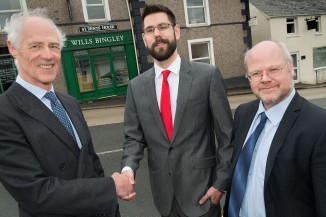 A young accountant working and training with a St Austell firm has beaten candidates from around the world to win a prestigious award after scoring the highest marks in an ICAEW (Institute of Chartered Accountants) exam.

Chris Dowrick, who works for Wills Bingley Chartered Accountants, St Austell, was presented with the sought-after Carter Prize at an award ceremony in London. He was the only candidate in this region to be honoured.

Wills Bingley Director, Giles Bingley, said he was both delighted and proud with Chris’s success and considered it a reflection of the high standards of training and services his company can offer.

“Chris’s achievement is particularly impressive because almost all of the prizes this year went to international firms’ UK and overseas students,” said Giles. “Chris is extremely switched on - he’s fast, accurate, picks up on what’s going on around him and knows how to handle it. I hope he will go on to be a partner in this firm when he completes his training.”

Chris was a relative latecomer to accountancy. He grew up in St Austell and left college with good A level results but turned down a university place because he was unsure about the course he’d chosen. Whilst considering his options, he took a job in B & Q. After three years he began studying accountancy at St Austell College one day a week and immediately began to shine. When Giles was looking for new trainees he approached the college. Chris’s tutors recommended him and Giles immediately took him on as an apprentice. Nurtured by Wills Bingley, Chris has continued to excel.

“I really enjoy the work and appreciate the excellent training, support and advice I receive at Wills Bingley,” said Chris. “Obviously I’m thrilled with the Carter Prize - not least because, by passing the exam, I’m closer to being fully qualified. I should qualify as a chartered accountant this time next year and although this will open up many areas of finance to me I’m planning to stay on in professional practice and work towards becoming a partner - hopefully with Wills Bingley.”